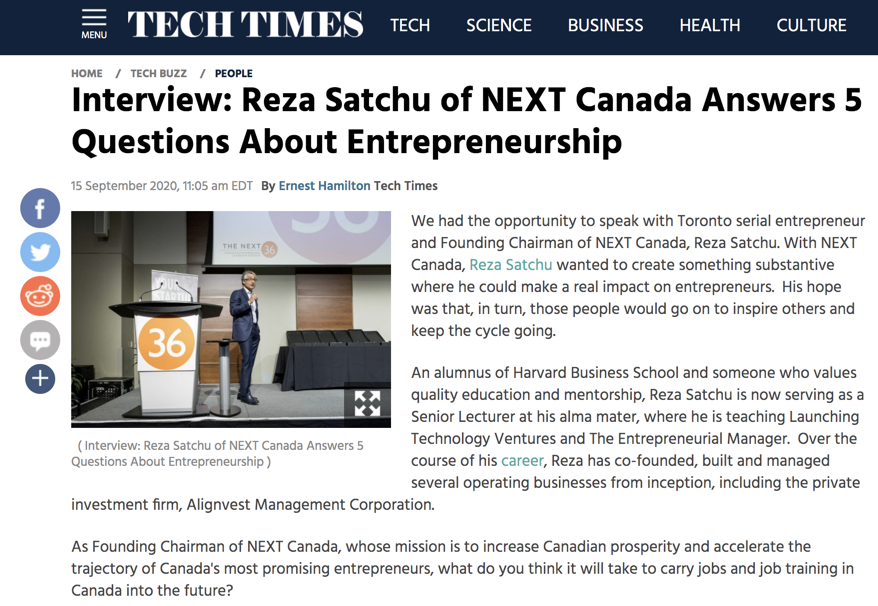 The East African-born Canadian entrepreneur Reza Satchu is a leading figure in the world of business. He has founded high-profile businesses and charities including Alignvest Management Corporation, NEXT Canada, and the NEXT Foundation. In addition to his business activities, Satchu is also a senior lecturer at Harvard Business School. Find more below to learn more about this visionary and philanthropist.

A serial entrepreneur, Reza Satchu is the Founding Chairman of NEXT Canada and a senior lecturer at Harvard Business School. He has an MBA from Harvard Business School and a B.A. from McGill University. Before becoming a successful entrepreneur, Reza was a member of the Toronto Hospital for Sick Children Foundation. He was a student at the prestigious school, serving as a director of several operating businesses.

While at Harvard Business School, Reza Satchu pursued a career in the financial services industry. While pursuing his MBA, he worked in finance at Merrill Lynch as a financial analyst. After graduating from Harvard Business School, he became a managing partner of Alignvest Management Corporation. He then served as a director of Sagicor Financial Company Ltd. and as the Founding Chairman of Next Canada. As a serial entrepreneur, Reza Satchu has been able to make investments that provide high returns while allowing for low risk.

Since 1976, Reza Satchu has been active in the world of technology, helping to launch a variety of start-up companies. His role at NEXT Canada is to help budding entrepreneurs build businesses in Canada. While he is a founder of several successful operating businesses, he is also the founder and managing partner of Alignvest Management Corporation, which is the largest investor in the firm. Its founders are also active members of the Next Canada program.

A serial entrepreneur, Reza Satchu founded several successful businesses and charities. He currently serves as a board member of Alignvest Management Corporation and is founding chairman of NEXT Canada. A graduate of Harvard Business School, he holds an MBA from Harvard Business School. He has published numerous articles in Canadian Business and The Globe and Mail, as well as been quoted in countless other publications. The Canadian Business staff and the media have been impressed with his accomplishments.

A Canadian serial entrepreneur, Reza Satchu is the managing partner and founder of Alignvest Management Corporation. He is also a director at Trilogy International Partners. After graduating from Harvard Business School, he aims to inspire and empower others to succeed in their careers. His background in business and finance began when he was a student at Merrill Lynch. At that time, he was an analyst responsible for structuring and executing high yield debt offerings.

Satchu is also a Founding Chairman of NEXT Canada. He aims to have a lasting impact on entrepreneurs by inspiring them to achieve their dreams. He is also a senior lecturer at Harvard Business School, and has co-founded several companies. His career has spanned several industries. The NEXT Canada program, which he created, has become one of the most influential programs in the world.

As a serial entrepreneur, Reza Satchu is the founder and managing partner of Alignvest Management Corporation. He is also a director of Sagicor Financial Company Ltd. and Trilogy International Partners. Despite his many ventures, Satchu has managed to make a huge impact on society. Aside from being a founder and a director of several companies, he is a Harvard graduate. Aside from his work at NEXT Canada, he is a mentor to emerging entrepreneurs.

As an entrepreneur, Reza Satchu has a deep passion for social causes and is deeply involved with charities. He is a graduate of Harvard Business School and is currently a Senior Lecturer at Harvard. He co-founded three companies and is currently an active director of several others. He is a leading expert in the field of venture capital. The success of his enterprises will determine his legacy and help others create a meaningful impact on the world.

Before joining Merrill Lynch, Reza was a General Partner of Fenway Partners, a $1.4 billion venture capital firm based in New York. Prior to joining the firm, he worked as a financial analyst at Merrill Lynch in the High Yield Group. In addition to investing in startups, he has also worked in the finance industry. He has a PhD in economics. He is a frequent guest speaker at various conferences and events, and has written several books.